Trending
You are at:Home»Uncategorized»AWARDS SHOWS/TELEVISION: EMMYS 2015 ARRIVALS
By Karen Salkin on September 22, 2015 · Uncategorized 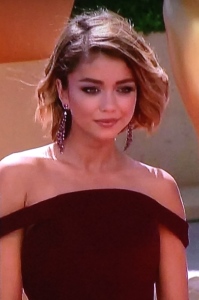 If you followed me on Twitter (@MajorCelebrity) during Sunday’s Emmys, I have to apologize for something. Though some of them were good, I was a bit disappointed in my own tweets on the arrivals interviews. But the majority of the interviews were so bad that I just could not bring myself to be that mean to point-out each one’s folly. I actually felt for the whole of show business! It’s gotten so unclassy. [Note: My tweets are still on my page, if you want to have a gander at them, anyway. And there are a couple of fun GIFs there, as well, including one of Sofia Vergara that I don’t think anyone else has!]

So I saved most of my snark, (and props, too,) for today, so let’s get to my thoughts on all the proceedings.

And yes, I did cut some a break because I felt so awful for these poor peeps in that brutal heat! I bet the rest of America was thrilled for those privileged peeps to be suffering like they were! 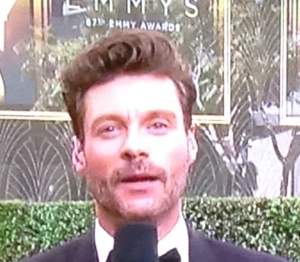 What was up with Ryan Seacrest‘s hair? Was it designed to give him more height?

Did any of you count the number of times the Rancic woman said “amazing” and “obsessed?” If it had been a drinking game, you all would have been drunk in about a minute!

I’m a fan of Kate McKinnon, but I didn’t know she speaks so creepy nasally because, since she does only skits on SNL, I’ve never heard her talk as herself before! Maybe she should have done the red carpet interviews as Justin Bieber! 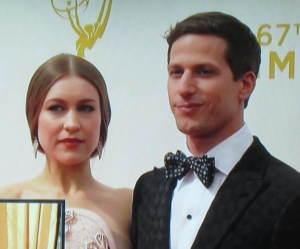 The woman with Andy Samberg. (The box in front is an insert they were showing.) Photo by Karen Salkin.

Was Andy Samberg‘s date auditioning to play Frau Blucher in Young Frankenstein?  And Mr. X asked why she was wearing a doily?

When did Sarah Hyland get gorgeous? She was the best-looking, best-dressed female there! No contest! The other women should take note. Actually, lots of notes!!!

I don’t know who Amy Shumer is, but why would someone so…hefty, shall we say, wear that dress?!  And had she just fallen out of bed with that scary hair? 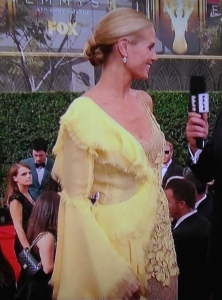 Heidi Klum. I guess the woman on the bottom left was confused over her Big Bird look, too! Photo by Karen Salkin.

How did Cat Deeley get that pregnant in six days??? The finale of SYTYCD was just the Monday before the Emmys, and you couldn’t see anything!

Giuliana Rancic is finally taking our advice and wearing sleeves!  But it’s literally 100 degrees there, so weird timing on her part.  But it’s the best dress she’s ever worn.

The beginning of a question Ryan asked Heidi Klum was, “With so much access to designers…,”  and I though the rest of it would be, “…why would you wear this???” At least, that’s what it should have been!  She looked like an idiot in that canary yellow Big Bird outfit! Maybe she got confused and thought she was attending one of her own Halloween parties, and she was going as Mrs. Big Bird! And her face even looked old and tired and like she forgot to do her make-up.  She looked like a tired old soccer mom. 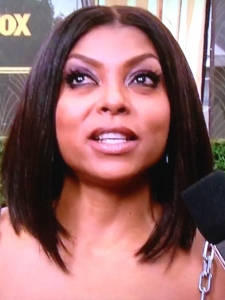 Taraji P. Henson looked gorgeous!  Best hair she’s ever had! And perfect dress and make-up, too. She looked so cute.

It was perfect to witness a convo between the two biggest phony-talkers ever—Cat Deeley and Giuliana Rancic!!! I didn’t even need a spoon to gag me!

Is this Jaime Alexander woman an idiot to wear a long-sleeved skintight dress in 100 degrees??? The answer is yes! [Note: Okay, now I’m cooking with gas! Back to my old self here.]

Christina Hendricks is so heavy, and has pointy teeth, so why does she think she’s so attractive?! (Remember when she got pissed at an interviewer who mentioned her weight?) And why would she wear a long-sleeved heavy-material dress in that heat?! Does she not know enough to check the forecast?! 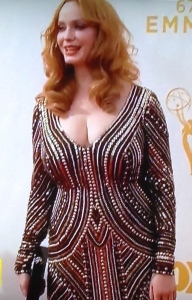 How rude of the Rancic woman to bring up Padma Lashmi‘s age!!! I’ve really never seen that before!

Mindy Kaling is so bad-looking, but she seems so sweet.

I love my birthday-mate, LL Cool J! As his name states, he is so cool! (We were at a party together in New York a few years back, and he could not have been nicer or more real. He even offered to watch my coat for me, so I could walk around unencumbered!)

Anthony Anderson lost a lot of weight.  Good for him!!!

And his teen-age son is gorgeous!  And so mature and well-spoken!  Love him!  [That’s Anthony and his beautiful son in the big photo at the top.] 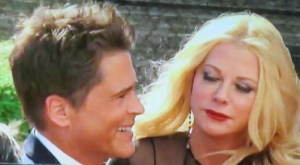 Rob Lowe and his wife. Photo by Karen Salkin.

Rob Lowe is even more gorgeous than ever, and his poor wife is just not good-looking. It happens to all couples—the man gets better-looking, and woman goes the other way—but it happened to them in spades!

This was the absolute best that Gina Rodriquez ever looked!

The best-dressed, by far, was Sarah Hyland. 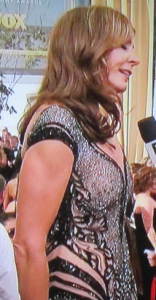 And I especially love her for this little exchange about the Emmys with dreadful interviewer, Giuliana Rancic: G–“Why is it so special, year after year?” Sarah–“I don’t know why it wouldn’t be special!  It’s the Emmys! It’s the celebration of television!”  “You idiot” understood.  Great answer, Sarah! Perhaps the best one ever!

Allison Janney may be a good actress, and probably even a nice person, but she was displaying back fat, was swayback, and that dress featured her little, floppy, different length and shape boobs, which was far from attractive.

It looks like Mayim Bialik was getting a head-start on Yom Kippur. (I can say that because I’m Jewish, too. But I wouldn’t go to an awards show look like that.) 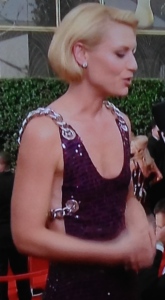 But I love her for saying,”I’m not only a neuroscientist in real life, I get to play one on TV.”  She’s the only one there who can state that!!!!  And she said it with a straight face, to boot!

Good for Sarah Paulson to have pointed-out to Giuliana that she asked the same inane question that everyone has asked!  That truly made my day. (Giuliana said that she thought she was the only one who came up with it. A five-year-old could have come up with that one! And probably did!)

Claire Danes‘ body look just like a clothes hanger in that dress!  Why would she feature her non-existent cleavage like that??? 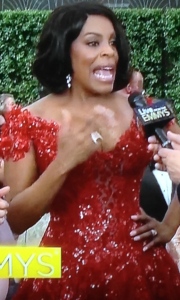 The co-host, (with Sam Rubin,) Jessica Homes, does look adorable pregnant.  She said she’s nine months along, which means she’s expecting any second, but she looked better than just about everyone else there!  She shouldn’t have even been there!  She should have been home resting!  And she was even wearing heels, which is just nuts of her.

It looks like Niecy Nash lost a ton of weight, in her perfect red gown! Good for her, whether she did or it was just the dress.

The two ultra-annoying hosts gave their guests all the bum’s rush off their podium.

Did Tayrn Manning think it was the middle of winter, in her heavy, long-sleeved, black dress??? 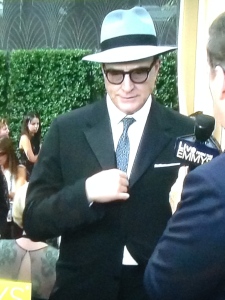 Is that Bradley Whitford or Truman Capote? Photo by Karen Salkin.

The hosts told Amy Shumer to give them her non-winning speech, so she did. In it, she threatened to blow-up the other nominees in their cars after the show, and they should say good-bye to their families!  How creepy and uncomfortable.  That a supposed comedian would think that’s a funny thing to say makes me worry about the business. Or just her.

And that’s it for this year’s Emmys! But the festivities don’t stop here; I still have all the attendant Gifting Suites to tell you about! Tomorrow is Yom Kippur, so, of course, no new column then. But the five-day suites coverage will begin bright and early on Thursday morning! And, if you’re of my ethnic persuasion, I wish you an easy fast, with lots of excellent (and probably necessary) atoning!