As a forever supporter of gay people and causes, I was happy to attend the opening soiree for the Reel to Real: Portrayals and Perceptions of Gays in Hollywood exhibit at the Hollywood Museum last week.  Gay guys were one of my major group of fans in the heyday of my show, Karen’s Restaurant Revue, and I’m really happy to see that being gay is not only not a stigma anymore, but it’s now a life circumstance to be celebrated! So, yay! 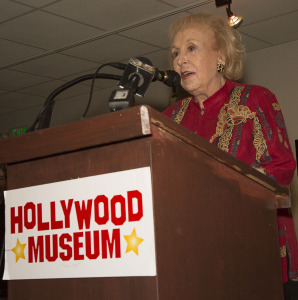 [Sidebar: I have to share one of my favorite stories from those days, told to me by one of those fans.  He bumped into his next door neighbor in his apartment building, and she asked him how his “cute little girlfriend” is.  Being gay, he could not imagine why she thought he had a girlfriend!  When he told her that he didn’t have a girlfriend, she queried, “Then who’s that funny girl who’s always over at your place talking about where to go eat?  Boy, can she talk!”  He then realized that he always turned the volume on my show all the way up, so that he could walk around his apartment and still hear me!  (That differs from what straight guys sometimes told me they did– they watched my show to look at me, while turning the volume down! Lovely.) ]

Okay, let’s talk about the exhibit, and opening fete, shall we?  It’s in the Hollywood Museum, which is itself in the historic Max Factor Building, at the corner of Hollywood and Highland. I had hosted a show about Los Angeles on the Travel Channel many years ago, and my first piece for them was on the Max Factor Museum. I hadn’t realized that it has changed names and focuses. But I was very pleased to see that it’s just as fascinating now as it was then.  We guests all got to explore the Max Factor area, on the ground level, after the party, while this current exhibit is on the third. (Never in my life did I expect to write the words “Max Factor” three times in one paragraph! Oops—make it four!) 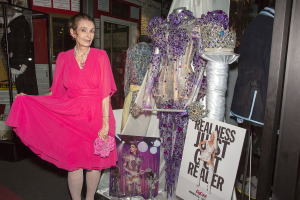 Iconic movie star Margaret O’Brien, standing next to one of the displays in the exhibit. Notice those pointing-straight-out ear adornments! Photo by Bill Dow.

Reel to Real: Portrayals and Perceptions of Gays in Hollywood is billed as “an entertaining and informative retrospective of LGBT images in film and television throughout the decades.”  It features photos, costumes, and props from the olden days (including an outfit that Nathan Lane wore in one of my mother’s all-time favorite movies, The Birdcage,) through now (such as Jessie Tyler Ferguson’s and Eric Stonestreet’s wardrobe from Modern Family.) With all the hubbub the night I was there, I didn’t get to see it all, so I’m definitely going back!

We began the evening by mingling on the ground floor, accompanied by cocktails and hors d’oeuvres.  Then we did the most fun thing–we were taken up to the party on the fourth floor by an elevator the size of which I’ve seen only at Disneyland’s Haunted Mansion attraction!  It came complete with a long bench to rest on, and–ready for this–a bar!  It’s a party elevator! (I’m pretty sure it’s really designed for moving the exhibits in and out, but it sounds so much more glamorous the other way, doesn’t it?)

Once up there, we were treated to many speakers, foremost of whom was Everybody Loves Raymond‘s mom, Doris Roberts.  A long-time supporter of the gay community, she said that she wishes a gay guy would marry her already!  The guests were also interested in what female Deputy Chief Beatrice Girmala, and the exhibit’s primary sponsor, Councilman Mitch O’Farrell, had to say. 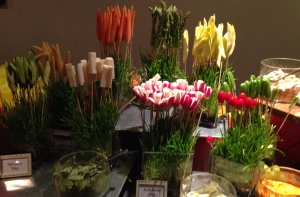 Of course, as super-foodies, my friend Alice and I could barely tear ourselves away from the delicious and beautiful buffets. The first one featured cheeses and veggies on sticks, (which were designed to look like flower bouquets,) the second had caviar and the trimmings, (which, being the cheap date that Mr. X always says I am, and then adds, “And you don’t cost much, either!,” ba-dum-bum, I didn’t try,) and the third was our favorite–the freshly-sliced-on-site beef tenderloin table!  On toast, with the au jus, there was nothing better!

And I loved the special touch of all the napkins and cutlery being multi-colors.  It’s right up my alley because I’m a color freak, (the guest room in my house is affectionately called the “The Crayon Room.”)  But I think the caterers did it at this one because rainbows are a symbol for the LGBT community.

I had an amusing experience on the way out. As Alice and I rode down in the elevator, I mentioned to the guy operating it that I was thrilled to finally sit down (on the above-mentioned bench) because my broken back was hurting from standing the whole time at the event.  He and I got into a discussion about it, and I mentioned how I hate not being allowed to exercise because of the injury.  He suggested that I swim, and then he told Alice to buy me a pool!  I couldn’t figure out why he would think that a pal of mine should do something like that for me, and I told him that my boyfriend was considering getting a swim spa for our house.  I asked Alice if she thought she looked wealthy, which would explain why he thought she would buy me a pool, which was such an odd thing to say. She laughed and explained that he probably assumed everyone who attended was gay, so he thought that Alice and I were a couple!  I was glad that at least she’s cute!

Back to the purpose of our being there to begin with. Now it’s your turn to see it all; the exhibition will be featured in the Hollywood Museum through September 1.