This event was actually a three-in-one.  We got to see fabulous art, while eating delicious food, and it was all for a very charitable cause. 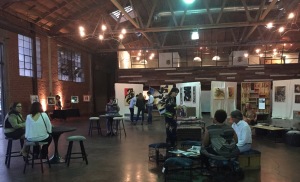 The Nomenclature Art +Design Show was presented by Street Art House and held at a venue I had never even heard of before, Cisco Brothers’ LA headquarters on Western.  I love discovering new places.  That space is humongous!  And that’s exactly what this event needed because the art work was mainly…furniture!  The pieces were all one-of-a-kind and designed just for this Nomenclature show. 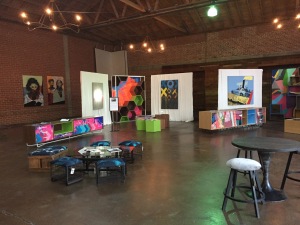 It was held over two days, and I was there for the VIP Opening Reception, which was lovely.  My friend, who’s an artist herself, and I were very impressed with all the work we saw.  Of course, I, a color fanatic who has a room in my house dedicated to crayons(!—don’t ask,) was most happy with the many very colorful pieces.

After we perused the whole room, we realized that we were hungry.  It might have had something to do with the mouth-watering aromas that were emanating from in front of the open-air entrance.  That’s where Taco Daddy was set-up, serving three different varieties of open-face soft tacos.  (I love their banner that declared, “Not yo mama’s tacos!”  Very clever.) 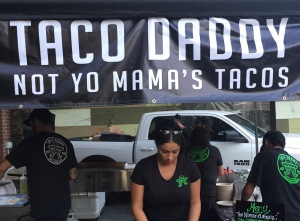 My friend and I both chose pork tacos, hers with the toppings, mine plain save for salsa, and they were all absolutely delicious.  We were actually on our way to a fancy gala, where there would be a lot more food, but these tacos were so heavenly that we couldn’t help but finish them, leaving no stomach room for the next place.

We washed it all down with a beverage that was new to even this jaded foodie–pumpkin spice horchata!!!  I’ve had the regular horchata before, of course, but this Autumn flavor was out of this world!  I think we know who my new daddy is! (Taco Daddy, in case you didn’t get my clever bon mots.) 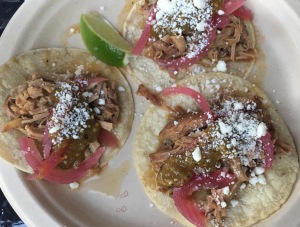 The trio of tacos. Photo by Karen Salkin.

The more important part of the evening was that a portion of art and event ticket sales benefited the ReFoundry Foundation, a non-profit whose purpose is to rehabilitate the lives of people who have been incarcerated. They train and assist them in starting their own furniture businesses, which is pretty impressive.  Ever since I saw the eye-opening documentary, 13th, last year, which exposed the insane incarceration rate in this country, I’ve been interested in that topic.

One interesting note: The next day, a friend and I were at the twice-a-year Beverly Hills outdoor art show, and I recognized the work of Karlos Marquez from the Nomenclature show! I was so excited about it, and he was too, when I told him about my experience at the Art + Design Show the night before. I found-out later that he’s considered to be one of LA’s premiere Mexican-American street-turned-fine-art artists, which made the meeting even more special. I felt like I was in the know in the art world for a minute there.

If you want to know more about any of this, go to www.streetarthouse.com.