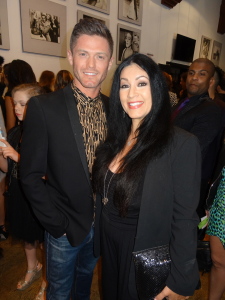 I love dance!!! I grew up being a dancer. (Until I injured my knee as a dance major at UCLA. But I still kept on. Until I messed-up my other one! That’s how much I love it!) I even began choreographing in high school, and into college. But, I swear, my work could never come close to what these amazing professional choreographers do. Even having done that bit myself, I still can’t imagine how their beautiful, creative minds envision what they bring to life. It hurts my head just thinking about it!

That’s why I enjoy attending the World Choreography Awards so much. These unbelievably talented people deserve to be lauded, as they are in this awards show.

First I must say that I’m thrilled the powers-that-be over there finally changed the name from “dance” awards to “choreography,” because that’s what the accolades are for! I hope that my article about the show last year helped even a tiny bit to convince them to change the name! (Read the third paragraph from my story about it last year here: itsnotaboutme.tv/news/danceawards-show-world-dance-awards-2014.) (You might want to read it anyway, for my rant supporting the art of dance.) 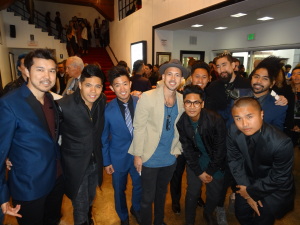 As I also mentioned in that column that I couldn’t wait for this year’s awards, and they were finally here last week!

This time, they were held in Hollywood’s Montalban Theatre, whose seating arrangement is much more conducive to a stage show than the club it was in last year. [Note: I had already written that last sentence, as soon as I got the invitation, which was before the event, obviously. Duh. And the first guest on stage said the very same thing! I guess we were all thinking it.] 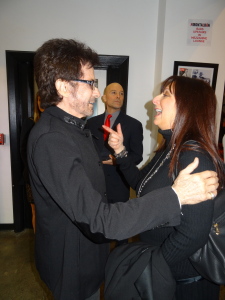 The lobby was buzzing for about an hour before the show, as many in the dance world arrived and greeted each other. Most were people the public isn’t aware of, but there were several dancers and choreographers (such as winners that night, Quest Crew and Doriana Sanchez, and multiple-nominee Spencer Liff,) whom I either knew a bit personally, or recognized from the TV shows that actually celebrate dance. There was also a celebrity or two sprinkled in, and the last two to arrive were the best: winner that night, Paula Abdul, (who stayed for the entire show, which I give her complete credit for,) and Oscar Winner (for West Side Story,) George Chakiris, who was the only person who received a standing ovation when he appeared on stage later in the evening! [Note: I know him personally, and am always still amazed at his age. My friend, who saw him up-close and personal, thought he was thirty years younger than he is!!! And he still has a real face!) 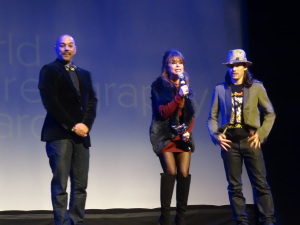 There was a cute moment when Paula won an award for choreographing a video tribute to cancer survivors, (with her partners, Nakul Dev Mahajan, Chucky Klapow, and Renee Ritchie.) She told us, “Life’s too short, and so am I!”

The show itself was the perfect mix of awards and performances. It all zipped right along. How refreshing for an awards show!!! And I’ve never seen any group of people appreciate each other like the dance world does. They even cheered when someone mentioned his or her agent! 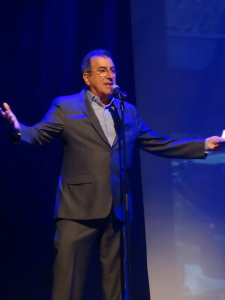 Presenter Kenny Ortega, who gave us a few steps before he presented. Wish it had been more! That man has got it!!! Photo by Lauren Bennett.

I love dancers!  So many of the presenters and winners danced as they came on stage. I only wish that each one had done more than a few steps. I so adore watching masters at work.

And dancers can really dress.  Everyone made the effort.  And hardly any two were dressed in the same vein.

And they were all excellent speakers, especially for people for make a living from not being verbal.  (As a matter of fact, the last winner of the evening, Christopher Scott, said on not knowing what to say, “I think that’s why we dance. So we don’t have to talk.”)

The host was Riker Lynch, a young guy musician who did a so much better hosting job than I expected from how full-of-himself he came-off as a contestant on a recent season of Dancing With The Stars.  And I was shocked to see that he really can dance.  I would have just assumed that he learned it all from doing that show, but he mentioned that he had been dancing since he was little! (DWTS tries to make believe that none of the contestants have previous dance experience, but I think we all have always known how untrue those claims are. This proves it.) 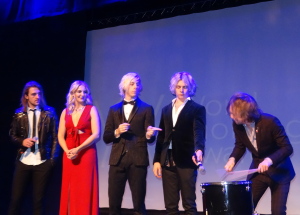 Host Riker Lynch, (in the middle,) flanked by his R5 bandmates. Photo by Lauren Bennett.

Not only did Riker tap dance a bit, but he did a wonderful jive number with the gorgeous Malene Ostergaard, whom I recognized right away from a couple of the televised dance shows, and possibly commercials, too. She was fabulous! And how she did a jive in those heels I’ll never understand.

The World Choreography Awards were kept moving with a perfect pacing of awards, performances, and a specialty video or two. It was all so entertaining! 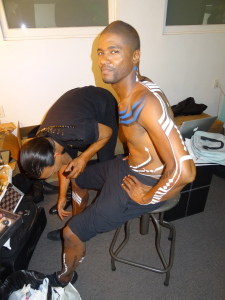 Lamonte Goode, getting his “warpaint” on backstage. Photo by Lauren Bennett.

As someone who grew up in New York, so therefore had the Rockettes as my dance idols, I loved seeing people of so many different sizes and shapes who can really dance and choreograph. That gives hope to so many youngsters with hopes of making a career in the art.

There were two performance highlights of the evening. The first was by a large group of kids and teens doing a wonderfully-executed and powerful anti-bullying number, which was choreographed by Break-out Artist Award winner, Jessica Starr. They were thrilled to receive the only performance standing ovation of the night. (They’re the ones featured in the big pic at the top.) The second was an amazing solo by Lamonte “Tales” Goode, whom I met before the show, in the make-up room, and at the after-party. His strength and grace have to be witnessed to be believed. I can’t even stand on a hoverboard, and he did incredible balancing tricks on his! And he’s a nice guy, to boot! 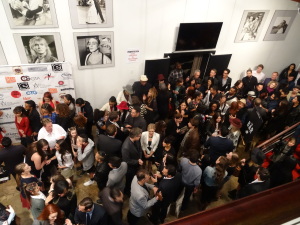 When the show itself was over, we all moved up to the mezzanine lounge for the after-party. It was interesting to see so many people walk into the room by moving and grooving. My friend and I loved that; you don’t see that fun attitude often in life. It was a very upbeat crowd. Unfortunately for us, we had to leave during the mingling, and before the dancing got going. That’s what I really wanted to see, but it was late and we both had to be up at the crack of dawn.

But you know I’ll be back next year! And so can you! I believe the World Choreography Awards are open to the public. Just go to their website for ticket information: www.worldchoreographyawards.com